Thank you to E. Williams from The Barbed Wire for writing such a great article from the perspective of those who have given their ALL for us to enjoy what freedoms we still have to enjoy. You are losing them, people, and its happening right under your nose! AMERICA, BLESS GOD! ~ nanarhonda Copyright 2015

If the Muslims (CAIR) in The United States of America have the audacity to say this, THEN LEAVE THE UNITED STATES OF AMERICA and go back into the hell-hole from whence you came!

I have had about enough of CAIR, Muslim Imam rhetoric in THIS Country, and a POTUS that encourages THEIR freedom of expression and freedom of religion while supressing OURS!

THIS IS YET ANOTHER VIOLATION OF OUR CONSTITUTION and POTUS HAS BEEN IN DERELICTION OF DUTY FOR 71/2 YEARS and NOT ONE PERSON IN DC has the courage to a damn thing about him or his corrupt administration!

Let it be known to you Muslims that would use OUR First Amendment to say such a thing that OUR SOLDIERS PAID THE PRICE FOR YOU TO SAY, OH, and to you ‘LONE WOLF’ ‘Radical’ Muslims, you are OUTNUMBERED and OUTGUNNED here in this Country and

We, the People, do not fear you!

Muslims Say Fallen U.S. Soldiers Should NOT Be Honored on Memorial Day
Has CAIR finally gone too far?
TOPRIGHTNEWS.COM

This is what MEMORIAL DAY is about!

It’s not about barbecues and picnics!  It’s about remembering those who gave their ALL for us, for Country, for honor, for freedom.

As you enjoy your extended weekend ‘celebrations’ of the beginning of summer, PLEASE, at least pause for a moment, and remember those that have given their lives so you can live your lives with the freedoms you still have!  I would also ask that you teach your children and/or grandchildren what this day REALLY is about because if you don’t, who will?
Thank you and may America bless God!

Thank you to RIGHT WING NEWS for this photo! 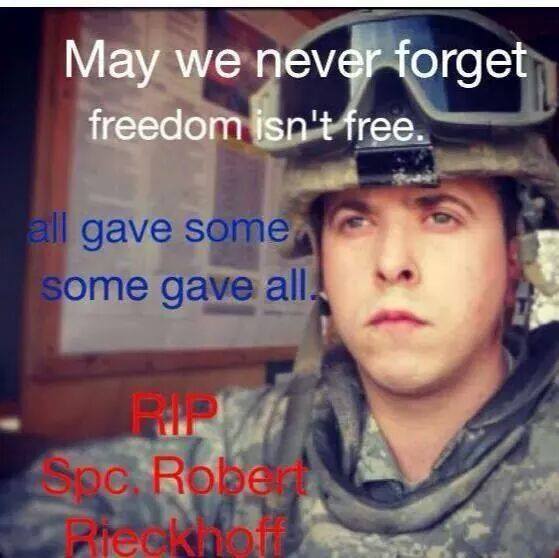 In honor of my friend’s son, Spc. Robert Reickhoff , who gave his all. 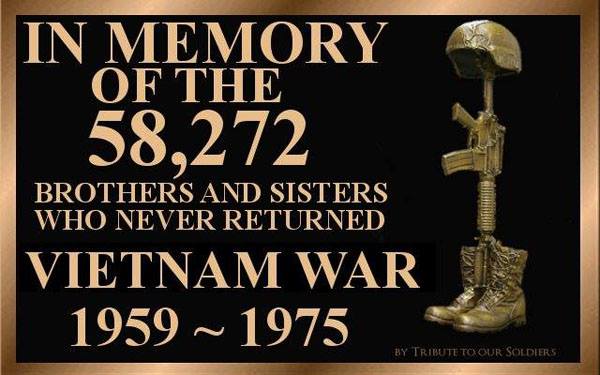 The graphic says By Tribute To Our Soldiers

I, personally, have my own strong feelings about how our Nation treated then, and STILL treats our Vietnam Vets.  They have never received the respect that was due them.  They did the job they were sent to do.  And they did it with honor and distinction just like any other soldier has done before and after them.  (Sometimes, that homeless man or woman you try to ignore on the street, is a homeless Vietnam Vet with PTSD that has never been treated!)

HOWEVER, as things are politically charged as they are today, they were just as much so and even WORSE then.  The same thing took place then as now; Hollywood know-it-alls that have NEVER WALKED A BLOCK let alone a mile in a soldiers boots, get on a platform, microphone in hand,
and spew their political rhetoric.

“If you can’t stand behind our Nation’s Military,
then STAND IN FRONT OF THEM!“

Thank you to Americans – Strong for this photo!

Seems like such a double standard… one is free expression and one is assault.

If the flag of the United States of America offends you and causes you to want to stomp on it, THEN LEAVE! There is nothing stopping you! OUR border is WIDE OPEN FOR YOU TO LEAVE!  Get out!!  Go!!!
~ nanarhonda
Copyright 2015

This company (if you want to call it that) has only its own best interests in mind.  Naturally, most companies do.  They are in the business of making money.

HOWEVER, when you return an item (an electric guitar) with their OWN TAGS STILL ON IT, and all they give you is 1/2 of what you paid for it, and they will turn around and hang it right back up where it was in the first place and sell it to another person for $49.95, this smacks of a lack of integrity.  The man I spoke to said, “It has to go to the tech guy, he has to restring it, and then determine its value.”  I told him that he “is full of crap.  The guitar doesn’t need to go to a tech to be restrung, it wasn’t USED!  YOUR TAGS ARE STILL ON IT!  You will hang it right back up and sell it to someone else for the same price.  So why not give my husband back the full amount that he paid?”  “Our return policy is 7 days.”  Oh, and they charge a RESTOCKING FEE!  ROFLOL  To hang a guitar back on the rack!  What a freaking joke!

Exceptions can and are made all the time to policies.  In this case, there could have been made an exception with the guitar as it was clear that it had not been used.  Sure, the rest of the stuff, dock the price, but the guitar, they screwed my husband over on.  (Technically, I screwed him over as I had wanted it and he bought it for me as a birthday present, however, with the swelling in my hands, I cannot play it.  I’ll stick to the keyboard.)

(The tiny amp & the cable my husband probably had to pay HIM to take.)

I kept the book as I can sell it myself.  But how do you ship a guitar if you sell it on eBay?!  LOL

To any gamers out there… Mine Craft gamers, my grandson is really into this game.  Here is another one of his videos.  ~ nanarhonda 2015

To any gamers out there… if you’re into Mine Craft, here is on of my grandson’s uploads…
~ nanarhonda 2015

I shared that I am blessed to be Nana to 10 beautiful grandchildren; one of which lives with Jesus! Each one is so precious in their own special way! I shared that I'm politically frustrated because I am a Conservative (former Republican) now The Constitution Party! I also share that I'm a frustrated Bible-believing Christian because I can't find a church that I'd want to go to if I could go to. I was spoiled by a pastor that taught as the Holy Spirit led him and then he left us and the church ended up closing its doors. I don't want to go to a church that 'plays' church by singing so many songs, then preaches for 20 minutes then offers EVERYONE to be born-again for 10 minutes. If the church is large enough, it will have to do this because of another service that's coming next. If its not, its because there is a football game on and the congregation will slowly disappear if the pastor preaches longer than the prescribed time.

I shared that I have been married 27 yrs this year. What I didn't say is that this man must be a saint to have stayed with me for 27 years! I have given him a lot of grief over the years (not that it hasn't been perfect on his end) he has definitely gotten the short end of the stick and now I'm disabled and he's stuck with that too! He does what he can to help me as best as he can. And he's doing a good job so far! (Maybe I should tell HIM that more often!) So that's just a little bit about me...

A Good Blog is Hard to Find

An Originalists view of The World We Live In Today

"It is the duty of every man, as far as his ability extends, to detect and expose delusion and error"..Thomas Paine

Tales from the mouth of a wolf

Original poetry, essays, artworks, photographs & musings on whatever moves me...

I write because my sanity requires an outlet . . .

something to honk about

Ocean and Earth - One Heartbeat

Education, Awareness & Respect. Inspirational thoughts and images about the ocean and wildlife.

The Voice of Americas Forgotten Heroes, Our Veterans

"Reimagining and reigniting the local church."